Finally, the MSDW Trip - The Trip

So I'm finally writing about my trip to Maryland Sheep and Wool...it's only 5 months late.  Once upon a time (early this year) Irishclover suggested we take a BFF trip to the MSDW and go wool shopping and have some girl time.  My wonderful hubby said I should definitely go.  It was close enough to stay at my aunt and uncle's house in DC.
My uncle, of course, made fun of us for travelling across the country to buy string and couldn't believe that there would be a lot of people there.  The teasing was all in good fun.  So these pictures are for him.  The first picture was taken when we slowed to a crawl 2 miles before our turn.  The second...well...that's about a tenth of the parking lot. 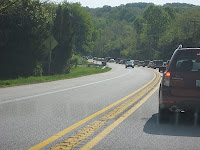 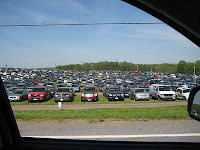 We went to the show both days.  It was a blast!  And we came home with all kinds of goodies which will be seen in a separate post.
My aunt, uncle and cousin were the greatest hosts.  Uncle D took us on his famous night tour of DC, which we aptly renamed "The DC Starbucks Tour."  It was so amazing.  We drove past many of the sites, got out at the White House and of course (my favorite) the Lincoln Memorial.  I think part of it was my pregnant bladder was ready to get out of the car, but I'll use any excuse to see the Lincoln Memorial.  I'm always in awe.  The Starbucks part of it, I'm pretty sure there was one on every other block.